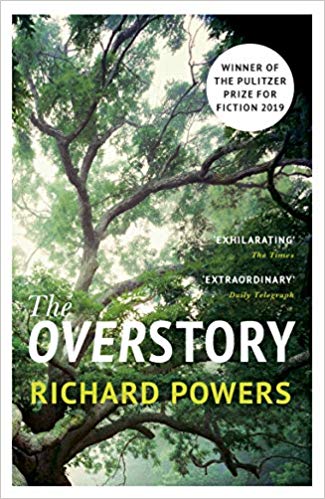 Richard Power’s novel, The Overstory, is not just a book about trees, it’s structured like a tree itself. The narrative is divided into four sections – Roots, Trunk, Crown and Seeds – and there is something arboreal about the way the story is told. Instead of the traditional ‘narrative arc’, the story is laid down like the rings of a tree, traced in cross-section.

The first section, ‘Roots’, anchors the rest by introducing the nine main characters one by one. Each one has a backstory that is intimately connected with trees. Each is a ‘regular’ person not a madcap firebrand, and their connection with trees is intimate and immediately recognisable. In one, a young man flips through a stack of photos of a tree that his father and grandfather had taken, once a month for over 75 years. “Each picture on its own shows nothing but the tree he climbed so often he could do it blind. But flipped through, a Corinthian column of wood swells under his thumb, rousing itself and shaking free.”

Roots lead to ‘Trunk’, the meatiest chunk of the book accounting for well over a third of its 625 pages. Here the characters converge in the forests of southern California to form a human barricade between the world’s most ancient living beings – the great Californian redwoods – and the merciless chainsaws of the logging industry.

Powers’ story is based on real events, during the summer of 1990 when as many as 1,500 activists came from all over the States to try and save the last stands of ancient sequoia, trees five hundred and more years old.

As I read about their actions – chaining themselves together, disabling machinery, scaling great heights on the flimsiest of platforms, daubing slogans on company walls, tangling with the police, calling upon the media, dressing up in wild costumes and painting their faces – people were doing all this not far from me, in London. As I write, the two-week Extinction Rebellion ‘uprising’ has just drawn to a close. Thousands of people have been arrested – and not just ‘hippies’ and ‘crusties’ and dreadlocked weirdoes that the media (and prime minister) would have us believe. But ordinary law-abiding citizens, grandparents and children, across races and from all kinds of backgrounds, all putting their lives on hold and their liberty on the line, for the planet.

I met a middle-aged, middle-class protestor who had spent a night in jail. It was not somewhere, she said, that ‘a person like me’ imagined ever being.

Another, a retired GP, spoke of the extraordinary gentleness of the police that she witnessed. “‘Whose planet? Our Planet! Whose Police? Our Police!’ That was what we were chanting. And I asked one of the policemen what it was like to be policing people that had such goodwill towards them. He said it was wonderful.’ She told me that one had told her that many of them go home at the end of their shift, change into regular clothes, and come back to join the protestors.

She took a picture of the statue of George Orwell at the BBC with an XR flag in one hand, next to his words inscribed into the very fabric of the building: “If liberty means anything at all, it means the right to tell people what they do not want to hear.” The lack of coverage about this protest, let alone the extent and seriousness of climate change, speaks volumes.

The Overstory is not just a novel about trees, it’s a book about what happens to ordinary people when they are radicalised. The word has its root in the Latin, radix or ‘root’, a double-whammy that Powers particularly enjoys. For him it came when he encountered his first giant redwood: the realisation that meaning does not begin and end with humans. That the world is alive. And that trees are a community of creatures, humming with multiple voices. That we need not look to blips from the farthest stars to realise – we are not alone. In fact, ‘we’ is not a narrow term, limited to our own species. We are legion – two-legged, feathered, four legged furred, six-legged, many armed, slithering, leaping, branching, acorn-bearing, rooted, shooting, a multi-leaved multitude.

One of the characters, a scientist called Patricia Westford, struggles to describe a Norway spruce called Old Tjikko, whose root-system is almost 10,000 years old. What use is a tree like this? she asks herself, to which there is only one response: “His use is to show that the world is not made for our utility.”

As the people change out of their XR gear and back into civvies, they come back changed and charged, more grief-stricken and more hopeful than they left. Re-entry into ‘normal’ life can, for some, be a challenge – as those who have lost a loved one often find. How do you just ‘carry on’? What do we eat, that will not further damage this damaged planet? How should we work, when so much ‘work’ works against the natural world? In short, how on earth do we go back to the branch that we’re sitting on and stop sawing?