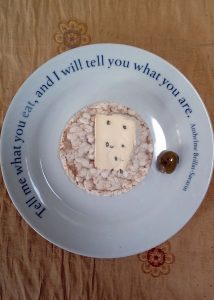 Around the rim of my dinner plate is a slightly alarming quotation. “Tell me what you eat,” it reads, “and I will tell you what you are.”

Judging from the contents in the middle of said plate, Jean Anthelme Brillat-Saverin would have had no hesitation in pronouncing me a snacker and a piglet. The author of the celebrated work on gastronomy (a term which he, in fact, coined)The Physiology of Taste in 1825, Brillat-Saverin was an aphorist par excellence, particularly when it came to “the pleasure of the table”. His magnum opus is less a cookery book — it only contains a smattering of actual recipes — than a philosophical meditation on the art of eating, and the etiquette of fine dining. He narrates his gastronomic journeys around Europe in a series of brief, vivid vignettes, garnished with snatches of dialogue and sardonic and witty bon mots. Offered a raisin one day, he declines saying, “I do not like wine in pills.”

On another occasion he gives strict instructions to not pluck a pheasant until it has been hung for three days. At that point, the bird should be stuffed with eviscerated snipe, mixed with “beef, lard and fines herbes, adding also salt and truffles enough to fill the stomach of the pheasant. Cut a slice of bread larger, considerably, than the pheasant, and cover it with the liver, etc., and a few truffles. An anchovy and a little fresh butter will do no harm. Put the pheasant on this preparation,” he goes on, “and when it is boiled surround it with Florida oranges. Do not be uneasy about your dinner.”

And finish it all off with a glass or two of Burgundy, “for long experience has taught me that it is the proper wine.” And after dessert, of course, the cheese must be brought out, for “a dessert without cheese is like a beautiful woman with one eye.”

I spent much of my two decades in India in search of good cheese — and I don’t mean paneer. In the early 2000s, half-way decent cheddar could be had in the gourmet shops of Hauz Khas Market and INA if you were lucky, but the creamy, soft cheeses which I craved never quite took in the subtropical climate. The joy of returning to England on my regular visits lay largely in slathering brie or Roquefort on chunks of fresh baked sourdough bread. Now I live less than an hour’s drive to the village of Cheddar itself, and cheese is my staple. On the cheese question, I side with the eccentric inventor Wallace, of Wallace and Gromit fame, for whom a biscuit without cheese is not just like a beautiful woman with no eye, but with no face or body either.

On the road to veganism, cheese is my Waterloo. I can do without meat — I think — but life without dairy is a life half-lived. No cheese? No butter? No cream to dab on scones with home-made raspberry jam? Sacré bleu! Brillat-Saverin would spin in his grave like a rotisserie.

As would, no doubt, that other great foodie, Julia Child, whose motto goes straight to the heart of the matter: “With enough butter, anything is good.”

Food writing has had a renaissance in the past few decades. Shelves that used to be crammed with cookbooks — books of recipes, that is — now mostly stand empty, as cooks turn to Google and balance their laptops on the kitchen counter, scrolling down ingredients with floury fingers. In their place, though, are books in which food is more than a list of ingredients — it is inextricably mixed with questions of identity, history, power, politics, philosophy, psychology, the environment, ethics and economics.

With GM crops and Monsanto, agronomics and soil degradation, carbon emissions and climate change, not to mention the murderous issue of beef-eating, today, what we eat not only tells us who we are, but where we’re heading. In the West, veganism is no longer seen as faddish but a sensible, ethical choice. Local food products have seen something of a renaissance across the world, as people are increasingly keen to cut down food-miles and tackle the enormous problem of waste in our food-production industries. Small signs of hope in the face of gigantic problems, and catastrophic inequalities.

Or, in the words of the percipient Brillat-Saverin, who wrote almost two centuries ago, at the height of the French Revolution: “The fate of a nation depends on the way that they eat.”