“Look! It is winter in Prague…” and with those six, finely judged opening words, the scene is set.

It is Gothic gloom all the way, as Sarah Perry leads the reader along a series of ever-darker, narrower and more harrowi 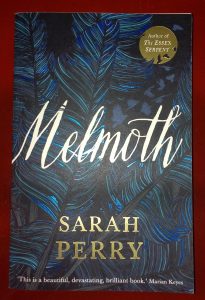 Who – or what – is Melmoth? Like the Wandering Jew of biblical legend, she is the silent witness, an unquiet spirit who roams through all of eternity stalking those lost souls who have committed some secret sin. She manifests as a swirling mass of darkness – as smoke, silk, or black feathers – “not an object but a feeling of despair and loneliness made incarnate.” She is the embodiment of guilt.

The story revolves around a woman called Helen Franklin, a middle-aged English woman, “neither short not tall, her hair neither dark nor fair… her neat coat belted, as colourless as she is.” She works as a translator and lives a solitary, loveless existence in Prague. Perry wastes no time in laying her central character’s soul bare, telling us on page three of the story, “Guilty of a crime for which she fears no proper recompense can ever be made, [Helen] is in exile, and willingly serves her full life term, having been her own jury and judge.” The rest of the book is an answer to two questions: what was her crime? And, leading on from that, does she deserve her (self-imposed) punishment?

Helen has only two friends in the world, Dr Karel Pražan and his ailing wife, Thea. Left a file of papers by an old man in the library Karel becomes obsessed with researching ‘Melmoth the Witness’, an subject that quickly leaks off the page and into their real lives. Simply speaking her name aloud seems to allow Melmoth access to the real world: she lurks in the shadows, always watchful. It is no accident that Melmoth begins with the word, Look!

Sarah Perry traces her inspiration back 200 years to a novel written by an Irish protestant clergyman called Charles Maturin. Around the same time as the young Mary Shelley was stitching together the body parts that would result in Frankenstein, Maturin announced that he was working on a novel so sensational and horrific that it would “out-Herod all the Herods” in history.

Perry’s new novel not only mirrors Maturin’s feverish hallucinatory style, but also its fiendishly clever structure, telling the tale through a series of historical documents: the voices of the haunted. Capitalising on Perry’s fame – her previous novel, The Essex Serpent, was a huge bestseller – her publishers have simultaneously re-issued Maturin’s Melmoth the Wanderer, with a new introduction by Sarah Perry herself.

The Gothic, she writes, is not so much a genre as a specific feeling: “that sensation of being deliciously caught between repulsion and attraction, unable to distinguish between a feeling of censure or pleasure at acts of transgression.” If you’re a fan of the Gothic, and are enticed by stories that repulse, you will enjoy both Melmoths. Just remember to sleep with the light on, and stay away from the shadows…