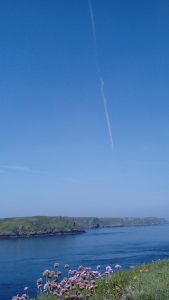 The Pembrokeshire coastal path traces the crinkled outline of southern Wales, weaving its way in and out of inlets and bays, along dramatic clifftops and down into to peaceful fishing harbours. From Cardigan in the north to Amroth in the south, it offers 186 miles of excellent walking.

There’s nothing quite like walking in the countryside with a friend who knows about it. Steven is great. Some miscellaneous chirrup will issue from the undergrowth and he’ll go: “Blackcap.” A stream of song from somewhere else and he’ll point out its distinctive trill: “Wren.” Then he apologises with a shrug, “I can’t help it: birder’s Tourette’s.” But for me and our other friends who have only recently been bitten by the birdwatching bug, his informative outbursts are only welcome. As long as we don’t call those white things up there ‘sea gulls’ – “That’s an absolute no-no,” says Steven, sucking in his teeth as though this is one step too far for even his generous spirit. “They’re gulls. Just ‘gulls’.”

We were here on the western edge of Wales in search of a bird that even we novices are in no danger of mistaking: the puffin.

The islands of Skokholm and Skomer are two of Britain’s most important nesting grounds for these iconic little seabirds – and at a time when every news item about wildlife tends to include the words ‘catastrophic’ and ‘decline’, it is heartening to know that these colonies at least are thriving.

I’d never seen a puffin – certainly not in the wild, and I don’t think even in a zoo – and I was fully prepared not to see one this time. As any wildlife enthusiast or bird-watcher knows, nature is wilful, skittish, fleeting and rarely, if ever, on time. I armed myself with was binoculars, sandwiches, and expectations set grass-cuttingly low.

We joined the queue for the boat that would take us from Martin’s Haven to the larger of the two islands, Skomer, that shimmered pink in the distance, its cliff tops thickly sprinkled with sea pinks and red campion flowers. As the boat chugged away from the landing, we squinted across the dazzling water. The air around the island thrummed with activity: shearswaters, gannets, gulls and – yes! “A puffin!” the cry went up prompting the boat to yaw dangerously to the left as everyone craned over for a look. Then, someone spotted another – then another – and more, until we realised we were quite suddenly ploughing through puffins. They scattered out of our way like grasshoppers as you walk through a meadow. Skittering, scooting, scarpering… 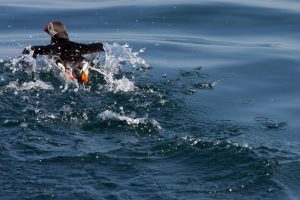 “That’s what it’s called,” he said, pointing at a bird as it waggle-bottomed and frantic-paddled away from our prow. “It’s squattering.”

The 6,000 or so breeding pairs on Skomer were busy with parental duties – searching the seas for sand eels and fish to feed their young. Puffins nest in underground burrows, where the female will lay a single egg – usually around late May. She and her partner take turns to incubate it for around six weeks until the chick – or more correctly ‘puffling’ – emerges: a little ball of dark-grey powder-puff.

The baby birds remain in the burrow for another six weeks, being fed on a near-constant rota by their parents, until they emerge ready to fly. Many are lost to predatory gulls, but if they do make it to adulthood will fly off from Skomer and out to sea. Atlantic puffins disperse northwards, spending the winter far out at sea. In fact the first two years of their life is spent entirely on the water.

Every spring, the pairs of puffins – who mate for life – return to their nesting grounds: even to the same burrows, having flown for months, thousands of miles on those short, stiff, unlikely looking wings. Puffins can live to the age of about 25 – although the oldest bird on Skomer is a magnificent 38 year old!

The puffin’s Latin name Fratercula arctica translates as ‘little brother (or ‘friar’) of the north’. And with its black and white clerical plumage and its waddling gait, there is something vicar-ish about it. They are comical birds – the collective noun for a colony of puffins is ‘a circus’ – but the prospects facing this iconic and much-loved bird are grim. Although the puffin numbers on Skomer and Skokholm are holding up well, those in Scotland and the north have severely declined – due, in the most part people think, to overfishing.

As we sailed through the calm blue waters around the island, and watched the little birds diving for fish and bobbing up to the surface looking faintly bemused, it was hard to think of them as endangered. It’s a rare pleasure, these days, to see vast ‘flocks’ or ‘shoals’ or ‘herds’ of any wild creature – and to be surrounded by puffins going about their business felt like a very special privilege indeed.

It’s no doubt that for modern-day visitors, the puffins are the star attraction, but there’s more to Pembrokeshire than its puffins. There are grey seals and dolphins, shearwaters, guillemots and razorbills, quaint pubs, picturesque fishing harbours, sandy coves and beautiful walks. But if you find yourself pining for a city – you’re in luck. There’s that too.

Perched on a spit of land, as though Wales were dipping its big toe into the Irish Sea just north of Skomer across St Brides Bay, St David’s is the UK’s smallest city. It boasts the unique distinction of having a cathedral big enough to house its entire population – a grand 1,841 souls – with pews to spare. St David’s is a delightful place with steep narrow streets winding their way up and down lined with cafes, souvenir shops, and pubs and boasting an excellent second-hand bookstore and a shop selling home-made ice cream to die for. Saint David is the patron saint of Wales, who in the 6th century AD performed a miracle: the ground where he stood to preach raised itself up to form a hill – although, as Welsh historian John Davies notes dryly, “one can scarcely conceive of any miracle more superfluous” in this particular part of the country than the creation of a new hill.

He’s right: all the hills looked miraculous, bathed in summer sun and redolent with birdsong. My friends and I walked along the tops of the cliffs as the sun drew down to the water and watched the shearwaters streaking by from right to left in a seemingly unending stream, as though there were some invisible bird-highway just off the coast that they were powering along. We watched a colony of razorbills, who clustered on a spur of rock pointing up from the sea as thickly as barnacles to the hull of a boat. A razorbill looks like a puffin when he’s taken off his clown’s costume: similar size, similar blunt beak, black and white all over. Not to be confused with a guillemot – which is like a razorbill on steroids who’s taken a pencil sharpener to his beak. It’s all very confusing to the non-ornithologist and a little auk-ward. But luckily, Steven was there to gently correct our mistakes – and nobody, not least the birds themselves, seemed to mind one bit.