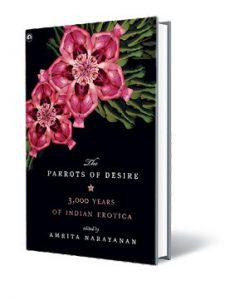 Three thousand years of sex in just under 250 pages is a tall order for anyone, so for this ground-breaking anthology, Amrita Narayanan skillfully cherry-picks some delicious fruit from across the subcontinent’s literary (and oral) traditions. The result is a wonderfully varied smorgasbord of sensual delights.

The Parrots of Desire opens with an extract from the Upanishads entitled, simply, provocatively and deeply, “You are Your Desire”:

You are what your deep, driving desire is

As your desire is, so is your will

As your will is so is your deed

As your deed is so is your destiny.

It is desire-in this profound sense-rather than ‘sex’ that is the engine driving this anthology. Our sexuality, our sensuality, our very identity as embodied beings, finds itself reflected in the many mirrors that these texts hold up.

The book challenges the assumption that Indian sexuality begins and ends with the Kama Sutra. There are several beautiful passages from it-indeed it would be a strange anthology if there weren’t-but Narayanan’s approach is to expand and open up the category of ‘erotica’. Here you will find jealousy, anger, regret and ennui as well as passion, longing and bodily fluids.

Rather than following a chronology, Narayanan groups the texts thematically, mixing poetry with prose throughout. Opening with a section entitled “Why Bother with Sex?” is a bold move, leaving the reader in no doubt that the collection is definitely worth the ‘bother’.

A poetic fragment, by the 5th century sage Bhartrihari, reminds us of the pre-eminence of delight. “Everything is delightful if you agree not to think even a little of how transient it all is,” he says, urging us to live to the full while we have the chance, utterly alive to the body’s many delights.

The next section, entitled “The Art of Seduction”, suggests how we might do just that. It might not have been wise to follow with the downbeat “Ennui in Marriage” section quite so early on in the book. But the pace picks up with “Rapture and Longing”, ending with one of the finest and most enraptured elegies in modern Indian poetry, “Infinite” by K. Satchidanandan:

Don’t say we are on two planets,

That our dancing feet are shackled.

Don’t say it is from within the rocks

That we dream of leaves and birds.

You were mine since you were born.

I grew these thorns waiting for you.

Yet only the springs deep beneath the sands

Can fill the dates with sweetness.

Some pieces will leave you in pieces, swooning with pleasure. Others might leave you cold. Manjula Padmanabhan’s “Three Virgins”, for example, is a great short story, but for an anthology of erotica, the sexual encounters she describes are oddly clinical.

Much of the book is in translation-with texts from Tamil, Sanskrit, Urdu, Hindi, Telugu, Gujarati, Punjabi, Brajabuli, Kannada and even Italian. The awkwardness of the translation is enjoyable at times. “On the twelfth day, with an arm around her neck, kiss both cheeks and open her eyes with your fingers, give the sound ‘sit’, and bite her within the mouth,” the Koka Shastra says.

More difficult than translating between languages is translating ‘body language’ into language at all, and the results can often be unintentionally hilarious. Tarun Tejpal, for example, both appears in this anthology and had the dubious distinction of his book The Alchemy of Desire being shortlisted for the Bad Sex Award in 2005.

The book ends with a dreamy post-coital passage from the Kama Sutra, the lovers sitting on the terrace enjoying the moonlight, talking quietly, and naming the stars. The anthology is a wonderful ‘pillow book’, a delight-full collection for dipping into and out of. It could do with a bit more of the lighthearted fun-and funniness-of sex. But as all good sex should, it left this reader both satisfied and wanting more.