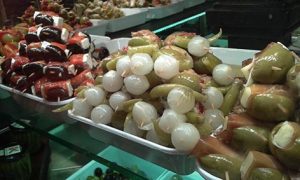 The reason for my recent trip to Spain was, ostensibly, to do some nature writing. But after a week, my bathroom scales told a different story. Between the crusty bread-and-tomato breakfasts, the fragrant paella lunches and the morsels of tempting tapas liberally sprinkled throughout, Nature, I confess, didn’t stand a chance.

I landed in Madrid, first, to spend a few days with my friend, Eugenia. Her attempts to show me the sights – the spectacular Palacio Real, the basilicas and cathedrals, the tree-lined tracks winding through Retiro park, Madrid’s ‘green lung’ – were stymied by my inability to pass a food shop without stopping. In the run-up to Easter, the patisseries go crazy, piling up all manner of festive pastries to tempt the unwary passer-by: torrijas (made either with milk or wine), pestiños, huesos de santo (literally ‘saint bones’!), rosquillas, buñuelos, leche frita…

“What are those?” I pointed to a pile of sugar-encrusted loops, lying like rope in one window. “Churros,” Eugenia explained. “They’re basically deep-fried fat dipped in chocolate.” My mouth was willing but my arteries quailed, so we settled instead for a bag of tejas – ‘roof tiles’ – thin curled biscuits, a little like langues de chat, that manage to be both crisp and soft simultaneously, melting on the tongue with a burst of vanilla and crushed almond.

We munched our way along happily until we arrived at San Miguel food market. We didn’t get much further. This elegant covered market of ornate wrought iron and glass underwent a massive restructuring in 2009. Gone are the days of haggling and bickering over raw meat and vegetables. Now, like many things that have undergone a transformation in Madrid in the last ten years, it has become a fancy gourmet tapas market with more tourists than madrileños.

On display were more varieties of paella than you can shake a saint’s bones at: vegetarian ones made with artichokes and beans, all manner of seafood in paella de marisco, even one made with arroz negro – black rice – which owes its name to the squid ink that it’s prepared in. The heart of any good paella lies, of course, in the oil it’s cooked in. Spaniards treasure their olive trees and everything that comes out of them: golden olive oil and tasteful, round aceitunas (olives). The latter can be served in many ways but a very interesting one is sold in one of the market’s stalls: banderillas. These consist of all sorts of pickles embedded inside the olives which are held together on a cocktail stick: piquillo peppers, anchovies, gherkins, onions, chilli… Crunchy, sour, and altogether delightful little morsels. 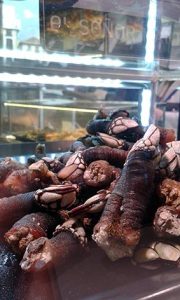 I recognized lots of the seafood on offer – mussels, oysters, clams and prawns – but some left me completely stumped. Sea urchins, for instance, bristling with green-black hedgehoggy spines. Or another strange looking shellfish that even Eugenia struggled to name, which looked like a pile of dragon knuckles. Or a spider crab as tall as a child, hung over one of the stalls, or a pile of squiggly baby eels to be devoured on toast.

Staggering a bit, I boarded the fast train to Alicante and from there caught the tram that trundles its way along the Mediterranean coast towards Benidorm. This stretch of coastline bristles with condos and villas for pensioners to live out their last days soaking up the sun. The sea was calm and blue, the beaches clean and sandy, the boulevards smooth and wheelchair-friendly. I was glad to leave all that behind and head for the hills.

A short drive up the winding road into the Aitana mountains, and I reached my final destination – a picturesque little village, perched on a rocky outcrop, and surrounded by steeply terraced slopes: Sella.

Standing out on the roof terrace I looked down on the rooftops. From here, the tiles look exactly like tejas, perfectly cooked biscuit curls laid out in overlapping rows, crunchy and sweet. The houses look like they’ve been whitewashed with zabaglione or crème caramel. In fact, the whole place is a confectionary delight, gently toasting in the early spring sun. 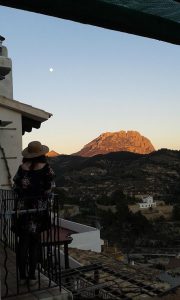 Towering above it all is the massif of Puig Campaña, the highest peak in the range, with its distinctive gap-toothed outline. Local legend has it that one of those mountain giants kicked the middle stone out to sea, and sure enough, just off the coast of Benidorm in the distance, you can see a tiny islet that looks like it would just exactly fit.

The walled terraces in this part of Spain are over 500 years old built, stone by painstaking stone, when this entire region was ruled by the Moors. Walk out of the village along one of the many tracks that wind through the hills, and you feel like you are walking back in time, treading in the footsteps of Romans and Berbers. Don’t be fooled by the natural splendours – the riot of wildflowers, the flutter of butterflies, the hum of bees, the herby perfume of wild rosemary and Aleppo pine – this is a working landscape.

I almost want to say ‘landscrape’ because it really does look like the hills have been dragged by a celestial rake, or laid like a huge, rumpled, ridged bedspread over a family of sleeping giants. 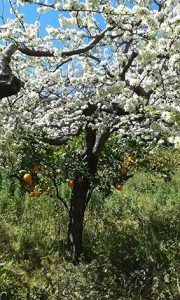 Each narrow pocket of level land is ploughed and irrigated with a network of channels and sluices. The thin, dry soil must be coaxed to yield its riches – but what riches it yields! Pick a plump orange from the tree, dig through its fragrant rind to the thick white pith beneath and then crush the flesh of the fruit into your mouth – never mind the messy run-off – and the burst of citrus freshness blows your vocabulary right out of the water. There just isn’t a way to describe this: words fail, senses take over, and you just have to give up, surrender, and reach for another.

The almond blossom is almost over and the ground is confettied with fallen petals. Until a few years ago, the entire almond crop of these hills was gathered up and sent to a town in the next valley called Jijona. Here it was made into turrón, a dizzyingly sweet nougat for which the town is famous. I craved something savoury, though, so I followed my nose back along the winding lanes through the village to the source of a delicious aroma: fresh baking bread.

Sella bread has been baked by the Santa Maria family for generations. Brother and sister duo Pepe and Maria run the bakery at the top of the village called Forn de Llenya (literally, ‘oven of wood’). Like most of the other shops in the village, it looks like an ordinary house. I rather hesitantly pulled aside the beaded curtains at the front door. Inside, Pepe was loading a long-handled shovel full of unbaked loaves into the oven. He beamed at me, and beckoned me over. “These ovens date back to 1929,” he announced proudly. He flipped open one of the black iron doors and I peered through the slot to the warm cave inside, with its rows upon rows of baguettes. Yet more bocadillos were cooling in a wide wooden tray near the counter. I picked two of the fattest and Maria wrapped them in paper for us to take home.

Opposite the counter was a large frame with what, at first glance, looked like lots of photos of the same baby, all big eyes and pouty lips and dressed in a blue cardigan, peeping out from a forest of baguettes. Then I noticed the labels: Miguel 1993, Maria 1999, Paul 2003… Each new addition to the family has been posed and photographed and added to the collection: golden-brown babies among the golden-brown loaves, as though freshly scooped out of Pepe’s ancient oven, as lovely and crisp and perfect as the bread itself.

As I walked back to the hotel, I remembered a line from that ultimate foodie-film, Ratatouille, where Colette, the sexy sous-chef, explains to rookie Linguini how to judge a good bread without tasting it: “Not ze look, not ze smell, but ze sound – the crust! Listen…” The crumbling crackle of crust as we tear into the bread on the way home passes the test with flying colours.

There was nothing left of the loaves by the time we got home: just a trail of fairytale crumbs to mark our way. I vowed to resist the urge to gorge on bread for the rest of our stay – but that was before I tasted espardenyá. Seriously: love at first bite. Encrusted with seasalt, like a suntanned tourist fresh up from the sea, and oozy with olive oil, this espadrille-shaped loaf is simply divine. Whoever thought that Man cannot live by bread alone had clearly never tasted Pepe Santa Maria’s espardenyá.

Away from the seaside, most tourists come to this region for the cycling and the hiking and the mountaineering. Flocks of cyclists whizz up and down these smooth roads like exotic parakeets. Bronzed young Danes with abs of steel strap on their boots in the Plaza Mayor, hoist their backpacks and head for the rockface. In summer, paragliders soar above the Tagarina Ravine. But for those of us of who delight in gentler pursuits, there is much to enjoy. For example, despite all the eating, I did, in fact, find time for Nature. On one particularly scintillating day, we spotted one of Europe’s largest birds (Golden eagle) and its smallest (Firecrest) within the space of 15 minutes. On another occasion, I spent a magical hour watching a red squirrel foraging in the branches of a walnut tree just yards from where I was sitting. I was rather thankful I didn’t come face to face with a wild boar, though their tracks are everywhere when you know what to look for.

Sated by scenery and full of the virtuous glow of having hiked all day, there’s nothing quite as wonderful as heading to Bar María for a steaming plate of her signature paella, washed down with a glass (or two) of ice-cold beer. And wiping your plate clean with – what else? – a hunk of espardenyá.