As I walked around the Barbican Gallery, recently, I came to an important realization: If there’s one thing to take your mind off the slow-mo-multi-vehicle motorway pile-up that is political life in Britain these days, it’s Icelandic performance art.

The past few weeks had been a bizarre mix of tragedy and pantomime starring Boris the Blustering Blunderbus, Michael the Goblin of Gove, Farage and his Ukipian orks and the May Queen of no 10 casting mystical tautologies – Brexit means Brexit means Brexit. Meanwhile, Labour rushed into the fray, sword drawn, and with a resounding battle cry of “No, no, we’ve got this” – proceeding to perform the most long-drawn-out and inept act of political hari-kiri in British parliamentary history.

So you can imagine with what girlish joy I skipped towards a pink neon sign promising ‘Scandinavian Pain’ and into an exhibition by performance artist Ragnar Kjartansson.

The first piece consisted of ten young men, strewn around the gallery in various states of déshabillé and surrounded by little islands of empty beer bottles, each of them strumming a guitar, repeating and echoing the same, haunting refrain: “Take me by the dishwasher…” Behind them, a clip of 1970s soft porn played out on a faded loop: an elderly woman fidgeted and harrumphed in her wing-back armchair while, in the back kitchen, things were getting steamy. Mascara is smudged, dungarees are rumpled, brastraps go south. The dishwasher chunters on. It is all very pastel, dreamy, and strangely tender. The film was shot in 1976, the height of the Cod Wars: not that international fishing disputes were uppermost in the lovers’ minds by the looks of it. They are, the notes tell us, Kjartansson’s own parents – and these clumsily choreographed clinches could well be the moments leading to the artist’s arrival on earth.

Kjartansson’s approach to art is more long-distance marathon that 100 yard dash. In a slow relay, the louche young troubadours, in teams of ten, play the same refrain, striking the same note of distracted nonchalance for eight hours a day, for 53 days. Presumably with pee-breaks.

After about an hour of listening to ‘Take me by the dishwasher,’ I had entered into some kind of alternate universe. I might have stayed, happily, forever, watching the strumming singers wander from couch to mattress and back again. But there was more. 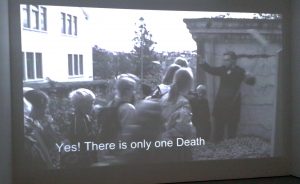 There were several short films in the exhibition. In one, shot in black and white, a small troop of children are being led through a cemetery. From a crypt, a figure suddenly emerges dressed in a shabby black suit and brandishing a scythe, whose thin cardboard blade flops unconvincingly in the sunlight. “I am DEATH!” Ragnar announces (for it is he). “Eeeeee!” the children shriek in an ecstasy of giggles. “What’s your name?” asks one. “I am DEATH!” he repeats. “Are you Satan?” asks another little girl. “Satan?” he says, looking vaguely offended, “No! I am DEATH.” The children trail after Death pestering him with cheeky persistent questions, until he retreats, with much theatrical eye-rolling, back into his crypt.

In another, there are five screens side by side. The artist and his mother stand side by side, facing the camera in front of a bookshelf. She turns to him and spits in his face. It’s a spray of saliva, rather like – I imagine – a llama might produce. Each clip was shot at five year intervals: the same people, doing exactly the same thing, just a little older each time. I decide I rather like Kjartansson’s mum: she’s certainly very game.

Alongside these are other films – very, very, very slow and very, very long. In one room, there are nine huge screens set around the walls. Each is a room in Rokeby Farm, a rambling mansion in upstate New York, where Kjartansson and a bunch of his musician friends spent a weekend. Although they cannot see each other, each can hear the other play – cello, piano, guitar, double bass, drums. Together yet separated, they create a gorgeous, polyphonic, lyrical threnody written by Kjartansson’s ex-wife and fellow-artist, Ásdís Sif Gunnarsdóttir. “Once again,” the singers croon, “I fall into. My…feminine… ways.” The mood is lush and post-party, the players all seem a little buzzed; barefoot and languid and surrounded by crumbling grandeur and empty bottles. At the end of an hour, they stroll absentmindedly into each other’s frames, through the house, across the walls of the gallery, and finally out into the cool, early dawn and sing their way off into the dawn.

As I left the gallery, stepping out of one kind of time and into another – from the cool, languid yugs of Kjartansson’s world to the brisk modern clockwork of London – the song continuing to circle in my head: less a lament than an invitation. To fall into a more generous and open way, where difference and distance can lead to harmony rather than discord. Perhaps, we should all fall, again, into our feminine ways. It seemed, to my ears, not a bad note to go out on.