Wandering around a second-hand bookshop in Taunton recently, I stumbled on an unassuming little book tucked away in the gardening section between The Royal Horticultural Society Plant Finder and a biography of Vita Sackville-West. The cloth hardback binding is scuffed and faded, showing through the ripped dust jacket like a tattered petticoat. I decided to buy it, more for the gorgeous woodcut illustrations inside than the text. I showed the nice lady at the till the price scribbled on the flyleaf in pencil: two shillings and sixpence. Well, that was 1946. We agreed on a fiver in today’s money, and I left the s 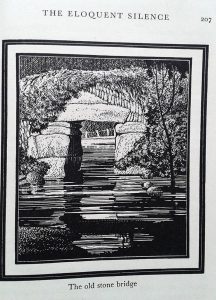 What I expected from The Eloquent Silence by WP Hodgkinson was the slightly pompous musings of a village vicar. What it turned out to be was something quite different — a little forgotten gem of a book about natural world and our inner landscape and how the two reflect, affect and nourish each other.

In 18 short chapters, the author seeks to capture and describe one small corner of England somewhere along the Severn River valley near Malvern in Worcestershire. Here he ‘first heard the cuckoo from my push-chair,’ and he lived there still in a 350-year-old cottage that ‘might be called a calendar artist’s dream complete with porch and hollyhocks.’

Hodgkinson’s text is radiant with his love of the countryside: ‘What a variety of colour there is in an autumn wood!’ he enthuses. “I am not sure which tree is the loveliest. I have seen gigantic beeches, resplendent in amber and red gold, which have almost decided me in their favour — that is, until seeing the delicate larch fronds hanging against a slate-blue distance, or catching sight of a majestic rowan crowned with scarlet berries.” He describes the flight of birds and identifies their songs with the practised ease of someone who has spent long hours doing nothing but being outside in the countryside with ears and eyes wide open.

Hodgkinson, like all naturalists — and all writers, for that matter — is first and foremost an observer. He paints his subject with few but brilliantly evocated lines, in a series of sharp, deft sketches. The pied wagtail, for example, is “a dapper little gentleman and walks in a dignified but most efficient manner even upon wet and slippery slates or tiles.”

But it is his intention not to merely describe or identify but to go beyond. “I have taken many liberties with local inhabitants and the local geography, believing that it is not my job to record, but rather to invest with mystery the things I see; not to describe the commonplace, but to robe the ordinary in the splendid vestments of the unusual.” The Eloquent Silence is less a guidebook than a missal, a series of hymns to the spiritual embodied in the physical world, the physical as it mirrors the soul.

One of the most powerful passages for me was his description of a typical English November day — “a wash, a waste, a weariness of damp, fog and cold… Everything seemed to mirror the greyness of my mood — from the sad, slow heave of the ploughed fields to the weary gesticulations of the waving larches.” Chancing upon a late wood anemone — a windflower, to give it its common, affectionate name — comes as a revelation, a miracle.

What Edmund de Waal does for touch in The Hare with the Amber Eyes, Hodgkinson does, 65 years earlier, for hearing. He describes listening to the wind, his garden the hub of a giant invisible wheel: “Down [the] spokes travel the many voices that I hear in the winds; and whether they come from the woods, fragrant with pine and primrose, or whether they blow from Amberley, blustering and weeping on the way, I am always sure of a message: for they never come without news.”

Over and above the rich lyricism of his visual descriptions, it is this faculty of hearing which illuminates the book. “Sometimes I stand and look at the tree and the tree looks back. So that I say, in spite of myself, ‘Be still my heart, these great trees are prayers.’ It is then that I know my place in the universe; and suddenly I feel so small that almost I deny myself, and become, not a being, but a breath of wind passing over into space.”

In some ways, Hodgkinson is the forefather of the modern nature-writing brat packers — Roger Deakins, Robert Macfarlane, William Fiennes, Helen Macdonald, John Lewis-Stempel and the like. Yet in other ways he has, perhaps, a closer affinity to earlier writers, mystics and thinkers. At times he comes across as a sort of English Chief Seattle, an ecological visionary with china cups and scones at tea time. Or perhaps his lineage can be traced back to that other great madman and poet, William Blake. They do seem to be on the same quest: To see a world in a grain of sand and heaven in a wild flower/Hold infinity in the palms of your hand and eternity in an hour .

I found myself wanting to find out more about this author — and being frustrated. There is nothing about him on the Net, and the Facebook page for The Eloquent Silence has no photo, no text and ‘0 people like this topic.’ I have no references to help triangulate him, or place him in context: who he was, where he came from, who read him. The only other book of his is called The Kingdom is a Garden (1948), and I have yet to track down a copy.

But in this age of information overload, there’s something quite delicious, quite rare and precious about this paucity of hyperlinkage. It returns you to the words, back to the simple and the real.

So I’ll leave you, as he leaves the reader at the end of the book and at the dimming of the day: “Half a mile down the valley a door closed. I knew the sound of that door latch; it told me that Mrs Ramble had shut out the darkness and gone indoors. A spark of light glimmered from her front window. She was lighting her lamp, and it looked absurdly like a fallen star. Once more I stood to meditate, to drink a final draught of the scene’s tranquility and to let its stillness wash over my soul like a green wave over a quiet shore.”