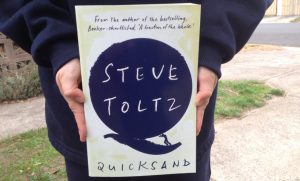 Reading Steve Toltz is a rollercoaster. You get that top-of-head lifting off, hyperventilating, vertiginous rush. The depths to which his characters plunge is about as heart-stopping as the inventive heights he repeatedly hits with his genius turns of phrase. It also makes you feel giddy and a little bit nauseous. At least that’s how I felt having finished his Man Booker shortlisted first book, A Fraction of the Whole.

The news that his second novel was about to be published gave me pause. If that first 700-pager was a fraction, I wondered, just how far off are we from the whole? Half way? Three-quarters? Ten per cent?

When uncorrected proof of Quicksand landed on my desk with a resounding thump, I quailed… but only briefly. Like a junkie eager for her next fix, I couldn’t hold out for long.

Writing a book about writing a book is a road that nobody – really – should go down, but secondnovelistis is a depressingly common disease. Having poured one’s creative genius, not to mention years of one’s life, writing one’s first novel, it’s as though the only subject left is to write another about the process. You could see Quicksand protagonist Liam as Toltz’s alter-ego, the entire book as a working-through of all the writerly angst that went into producing A Fraction. At one particularly bleak moment (and there are many to choose from), Liam faces what is euphemistically called ‘writer’s block’: “My brain made its usual pilgrimage to the mysterious land where language dies. My imagination was impenetrably dark, boarded up. The ideas remained inexpressible, penumbral. I had linguistic thrombosis, my textual flow impeded by the narrowing of some creative vessel. I sat simpering at the desk, and thought: You fucker, you failed to cannibalise drug deals, corruption, murdered nurses, domestic disputes, drowned children, hit-and-runs, and now you can’t even fashion a decent story out of your wife’s sadism. You’re done.”

In order to get past the ‘done’, Liam turns to his oldest friend, the “well-known parasite and failure”, Aldo Benjamin. Aldo becomes a muse – not only to Liam, but to an entire artistic community to become a cult-figure in his own right. He is the ultimate anti-hero “the kind of man you might come across sharing cigarettes in an alleyway with a masturbating hobo.” It’s not just that Aldo is morally bankrupt – along with his moral compass, God (petty, vindictive deity that he is) has divested him of every modicum of good fortune there is. Every single one of his business ventures fail, his relationships resemble motorway pile-ups, his worst phobias (hospitalization and imprisonment) are visited upon him in triplicate. Many – okay, some – people might crash their ex’s wedding and make a damning wedding speech before falling over drunk, but only Aldo could end up in ICU having nicked his jugular on a cake fork on the way down.

The one thing he’s left with is his unstoppable flood of language. Where Liam has writer’s block, Aldo has an acute, possibly terminal, case of verbal diarrhea. In Quicksand, the second section is a full 168 pages of Aldo’s court deposition – some of it in free verse – as he stands (or rather sits, as he is by now a paraplegic) on trial for the murder of his one-time lover, Mimi.

Describing their friendship, Liam explains: “The weird truth is I’ve often become good friends with people I originally disliked, and the more I downright loathed the person, the better friends we eventually became. This is certainly true of Aldo Benjamin, who irritated me at first, then infuriated me, then made me sick, then bored me senseless, which led to his most unforgiveable crime – occasionally, when in the process of boring me, he’d become self-aware and apologise for being boring. ‘No, no,’ I’d have to say, feigning shock at the suggestion, ‘you’re not boring me, please go on.’ I sometimes had to plead for Aldo to continue boring me.”

After a while, you start to question not only your own sanity, but that of everyone around you – in fact, of everyone who’s ever lived and Aldo’s particular brand of excoriating theology starts to make sense. Maybe God really does think of mass murder as carpooling for heaven. Why didn’t He send down a daughter – or twins? And then there’s Aldo’s final clincher: “Why the fuck didn’t He simply make the inflictor of pain the equal recipient of its sensation? It’s such an obvious idea, I’m almost embarrassed for having to suggest it!”

Steve Toltz. The best thing to have come out of Australia since sliced marsupials. Read him and weep.