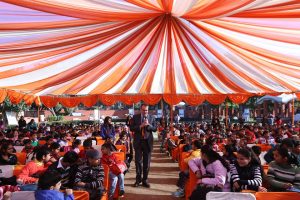 David Lelliot struts his stuff under the Big Top tent

I live in a city where Nizamuddin Auliya’s legendary curse ‘dilli dur ast’ has been turned on its head, and everywhere seems far from Delhi. It always seems tremendously exhilarating to leave the city’s centripetal pull and break out.

Boarding the good ol’ Shatabdi and heading off to the Chandigarh Children’s Literature Festival (of which I am festival director) with fellow travellers, Paro Anand, Kamal Pruthi, Ankit Chaddha, Poonam Girdhani, Anushka Ravishankar and Priya Kuriyan felt a bit like going on a school outing. We were all a bit giggly. And when we stepped out at Chandigarh, it was a breath of fresh air. I mean, literally. It always takes a bit of getting used to – you know, oxygen – when you’re a hardcore Delhi-ite, and by the time we reached the hotel we were all a bit lightheaded… added to which was the LemonTree Hotel aesthetic: citrus to the max.

The weather gods conspired to bless the festival with two brilliantly bright and breezy days. The sunlight poured through the orange-and-white-striped Big Top-style tent on the lawns of Kalagram, rippling and swirling like a devadasi’s harem pants. I knew that the festival was off to a great start when after the requisite lamp-lighting and formal welcome, David Lelliot, the British Deputy High Commissioner, grabbed the mike, jumped off the stage, and – Tigger-tie aflyin’ – launched into a retelling of The Three Little Pigs that would have made Stanislavski himself blush. 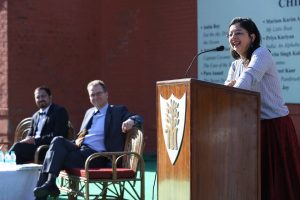 This spectacular ‘warm-up’ was followed by a stunning performance, based on Alice In Wonderland, by our two master-Dastangos, Poonam and Ankit. From where I was sitting, they seemed to float, like white sails on a boat, above a sea of bobbing children’s heads, wafted along by ‘wah-wahs’ from the kids. The rest of us performers muttered darkly about how unfair it was to set the bar so high, and how tough an act this was to follow. 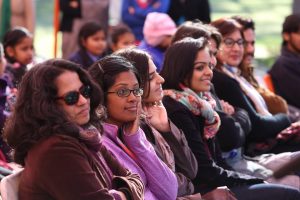 But follow we did! Anushka’s d-i-y detective story session threw up some excellently evil budding criminals as well as crime-fighters from the crowd of youngsters. And I got to introduce the inimitable Captain Coconut, he of the magnificent nose and microscopic brain. Priya Kuriyan had the kids laughing in horror as she regaled them with how when, looking for inspiration for the monkey character for her book, When Ail Became Bajrangbali, she found her house invaded by an entire simian family, all eager to participate in the creative brainstorm!

One of the most rewarding things about helping to put together events like this is finding fab folks and watching them do their stuff. Kamal Pruthi, who had been invisible for Day One cloistered away for a 8 hour (yes, count ’em!) workshop with kids at Dikshant International School, reappeared on Day Two, swathed in cloth, turban jauntily on his head, and transformed into a capering Kabuliwala, much to the delight of our young audience.

It was particularly nice for me to be there with Mathangi Subramanian, whose new book had *just* arrived from the printer. Dear Mrs Naidu is an epistolary novel, a series of letters from one confused 12-year-old girl to one rather awesome, albeit extremely dead, freedom fighter. We couldn’t have hoped for a nicer reception for this particular book’s first outing.

I also got to take off my publisher hat and put on my performing head in a creative writing session for about thirty kids. One of the ‘story kickstarter’ ideas I’d borrowed from a friend. I asked the children to write down simple definitions of common nouns – “a pen is a thing you write with” for example. We then ripped these down the middle and swapped definitions and nouns – to hilarious (and sometimes oddly poetic) effect. “A river… is something you send messages on if you don’t have a laptop” “Narendra Modi…is something you hang pictures on” – you get the gist. It was great fun, and very silly.

All in all, and thanks to the generosity, care, warmth and welcomingness of the great organising team, Chandigarh Children’s Literature Festival went off fantastically well. As an event, it’s just two years old – a wee toddler by any standards – but looks set to be a regular event on the kids’ lit calendar and something I’m sure will continue to grow and thrive for years to come.