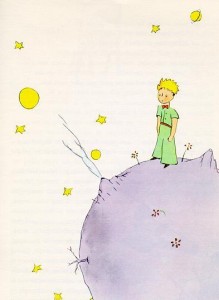 It’s that time of year again – the season of lists and mellow fruitfulness, as journalists scramble to compile their top 10, top 100, worst, best, most whatevers, into an annual tsunami that crashes over us all, leaving us washed up and gasping on the new year’s far shore. So rather than a round-up, I thought I’d sign off on 2014 with a little book that, 72 years after it was written, still sells more than 2 million copies a year. And, if the trailer is anything to go by, looks like becoming the most beautiful animated films of 2015.

Everyone knows the story of a little prince who leaves his own planet – a tiny, lonely asteroid in the vast sky – visits other tiny planets each with its own strange or deluded inhabitant, and finally falls to earth where he encounters an airman whose plane has crashed in the desert. The little boy asks the airman to draw him a sheep, and the prince narrates his life as the two wander through the desert in search of water. But it’s not the plot that we remember. It’s the drawings – the little round circles of the little boy’s eyes, the single line for a nose, the hat that is in fact a drawing of a boa constrictor swallowing an elephant, the lonely rose in her bell jar, and the tiny, fragile planet-let smaller than a house.

The baobabs that threaten to overrun the Prince’s tiny kingdom can stand for any one of any number of evils that threaten to overwhelm our own home: “an insignificant planet of a humdrum star lost in a galaxy tucked away in some forgotten corner of a universe in which there are far more galax 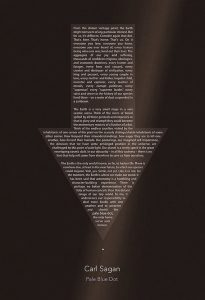 ies than people,” as Carl Sagan described it. Saint-Exupéry’s drawings call to mind the famous ‘pale blue dot’ photo taken (at Sagan’s request) from the Voyager 1 space probe twelve years after its launch in 1977, at the edge of our solar system. Earth, at a distance of 3.7 billion miles, could well be the Little Prince’s asteroid, with barely enough room for one small boy and a little rose. As Neil Armstrong’s recalled, looking back at the Earth from the moon: “I put up my thumb and shut one eye, and my thumb blotted out the planet Earth. I didn’t feel like a giant. I felt very, very small.”

There are several theories about the identity of the real little boy that inspired Saint-Exupéry’s drawings, and his tale: possibly the son of the aviator Charles Lindberg, with whom he was friends, possibly the son of philosopher Charles De Koninck, possibly the author himself as a child. Most likely it was a combination of the three. But the story perhaps took root in 1935, when the author, travelling to Russian by train, noticed a child, sleeping between his parents on the seat opposite: “What an adorable face! A golden fruit had been born of these two peasants….. This is a musician’s face, I told myself. This is the child Mozart. This is a life full of beautiful promise. Little princes in legends are not different from this. Protected, sheltered, cultivated, what could not this child become? When by mutation a new rose is born in a garden, all gardeners rejoice. They isolate the rose, tend it, foster it. But there is no gardener for men. This little Mozart will be shaped like the rest by the common stamping machine…. This little Mozart is condemned.”

The Little Prince is an allegory, a poetical tale, a philosophical treatise and a coded love-letter to the author’s beloved wife, Consuela. Both whimsical and profound, it has been described as ‘a children’s book for grown-ups’ – a phrase often deployed as a sort-of backhanded criticism (or do I mean compliment?) as though such books have missed their mark somehow, or are masquerading as something they’re not: a children’s book that is wasted on the young (to misquote Shaw).

In a crowded, noisy world where publishers (and filmmakers too for that matter) seem to spend their lives chasing the book or story that will be loud enough to make itself heard over the clamour, it is a comfort to know that the small and the quiet ones also endure. The Hunger Games or the Harry Potters are wonderful for their dazzle and brightness, and we love them like we love fireworks on a crisp cold night, but we will always come back home to warm ourselves next to the fire, nourished by the simple words of a little boy from a distant planet: “it is only with the heart that one can see rightly; what is essential is invisible to the eye.”

The Little Prince is Saint-Exupéry’s cri de coeur, a plea for a world in which there are gardeners of men, a place where the child-Mozart in all of us can be nurtured. That perhaps in requires not a giant leap of imagination but a very small step into the shoes of the child that we all once were.