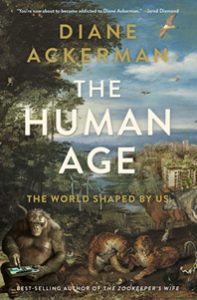 It takes a certain amount of loin-girding to buy a book on climate change — there are shelves to choose from — and I can rarely find a gird robust enough to cope with the steep spike in anxiety and the stomach-plunging drop into depression that such books usually precipitate. So it was with trepidation, and a certain amount of prescription meds, that I picked up a recent book on the subject — The Human Age by Diane Ackerman.

The Anthropocene is a term popularised by Nobel-prize winning chemist Paul Crutzen to cover the period of this planet’s history which could be called The Rise of the Humans. It is yet to be formally accepted as a geological time period — partly because there’s still no consensus about when it actually began: with the Industrial revolution in the late 18th century? Or with the beginning of agriculture? Or some other key marker further back in our prehistory? What’s for sure is that our activities as a species have now altered everything: the earth’s surface, its water bodies, its atmosphere, its species, its climate. There is very little ‘natural’ in nature any more — nothing untouched in some way by human activity, from the swallows nesting in the eaves of our houses to the creatures trundling along the ocean floor, from alligators in Florida toilet bowls to bees dying from insecticides.

But according to Ackerman, it’s not all bad.

This is an important, possibly even radical, viewpoint. Normally, when reading writers who say stuff like — climate change is not bad for everyone; in fact, hey, look at this opportunity — my natural instinct is to reach for the harpoon-gun. But Ackerman allows for no such knee-jerk reactions, for she’s neither a head-in-the-sand climate change naysayer, nor is she a gung-ho capitalist with an eye on new possibilities for exploitation and financial gain. She is chillingly clear-sighted about the devastation being wrought, but is unquenchably hopeful about our ability to deal with it:

“We’re in the midst of the planet’s sixth great extinction, between seventeen thousand and a hundred thousand species a year… Many scientists predict that at the pace we’re going, about half of all the world’s plants and animals will vanish by 2100. But, for a change, we know the exact causes of the extinction, having created them ourselves — climate change, habitat loss, pollution, invasive species, big agriculture, acidifying the oceans, urbanisation, a growing population demanding more natural resources — and we’re in a position to stop them, if we set our collective mind to it.”

Setting their collective minds to it are a ‘mariculturalist’ practising sustainable ocean farming off the coast of Connecticut, a loopy vertical gardener with a green fingernail and green hair redefining what’s inside and what’s out in Paris, stem cell researchers forging ahead with de-extinction programmes across the world. Ackerman skips around the planet, zooming in with her magnifying glass, and zooming out to give a satellite’s overview, thrilled and excited by the possibilities of the human imagination to rise to the challenge — the greatest one we as a species have ever faced — of diminishing natural resources, drastic climate change, and the vanishing of our precious biodiversity.

She looks at town planners and civil engineers who are creating ‘homes and public spaces that are living organisms that will scrub the air of pollutants, increase oxygen, reduce noise, save energy, refresh the spirit, and sink our roots deeper into the natural world.’ She cites the Swedish city of Kalmar which, with its hybrid cars, chicken-manure-powered buses, low-energy streetlights and such like, has switched dependency from almost entirely fossil-fuels to 65 per cent renewable, and aims to rid itself entirely of fossil fuels by 2030. Sweden as a whole has already reduced its oil dependency by a staggering 90 per cent, cut its carbon dioxide emissions by nearly 10 per cent and reduced sulphur pollution to pre-World War I levels. According to Bosse Lindholm, who manages Kalmar’s sustainability efforts, ‘the challenge isn’t technological, it’s changing the way people think.’

Ackerman sounds positively evangelical at times. She describes the sun as a ‘molten socket that stretches 92,960,000 miles’ and that fossil fuels are only, anyway, a form of buried sunlight: “Now we’re just skipping the secondhand part and going straight to the wellspring of that fuel. Wood, coal, oil, and gas were only intermediaries after all, and using them was a sign of our immaturity as a species.” She waxes lyrical about harnessing energy from the slipstream of trains, body heat from the companionable crush of a subway system… it’s all possible. And before you can say Intergovernmental Report on Climate Change, Ackerman has already woven a deft metaphor around it.

Ackerman’s default setting is enthusiastic wonderment. Early on in the book she narrates an incident scuba diving off the coast of Jamaica where, alarmed by her movements, her diving instructor assumes she’s in trouble and needs to surface. No, it’s just Diane Ackerman expressing what she expresses best:  “There was no way to mime that I wasn’t hurt or frightened, but jubilant, merely glad to the brink of tears.”

Walls that twitch and flex like muscles, buildings that self-regulate their temperature using techniques inspired by termites; ship hulls rippled like whale skin to skim easily through the water and conserve fuel — The Human Age is a tidal rush of ideas — it’s hard not to get swept along with it all. At times she seems a little naive: transported by the delights of vertical gardens, and their role in cleaning and re-oxygenating the air while being just so goddam pretty, she manages to suggest that the most arduous and dangerous part of the work for the maintenance crew at one such multi-storey cascade in downtown Vancouver is to harvest the pineapples before they drop on someone’s head.

But given the despairing or depressing tomes on the rest of the climate change bookshelf, we can perhaps forgive these flights of fancy, and share the hope, for it is just that, that we and our fellow humans may save ourselves — and the rest of the planet — yet.