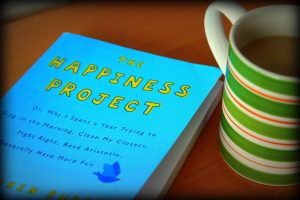 As I parted with a wad of cash in the bookstore the other day, exchanging one kind of paper for another, I experienced that particular thrill that one gets perfectly summed up by the slogan on the bag that my paperback came in: ‘You can’t buy happiness, but you can buy books. And that’s kind of the same thing.’ Which prompted me to wonder, would the effect be squared if I bought a book about happiness? So I did.
Gretchen Rubin’s The Happiness Project wears its heart on its sleeve. It is a bright blue book with jolly yellow lettering. There’s a blue bird (of happiness, presumably) flying over some brownstone New York tenement buildings, and just in case that didn’t hammer home the point hard enough, the subtitle tells you pretty much all you need to know about the author: ‘Why I Spent a Year Trying to Sing in the Morning, Clean My Closets, Fight Right, Read Aristotle, and Generally Have More Fun.’
A busy mother of two young daughters, a New Yorker and, by her own admission, a very ‘driven’ person, Rubin is a bit of a powerhouse: a list-maker, a goal-setter and achievement-bunny. Her approach to the whole business of ‘becoming happier’ is a slightly alarming set of directives. She chops up her year into twelve bite-size chunks. January is dedicated to finding ways to boost energy, February to remembering love, March is all about aiming higher, the slogan for April (a bit of a relief, at this point) is to ‘lighten up’ – and so on.
Peppered throughout are rules, slogans and reminders: Smile more. Try to look accessible and warm. Wherever possible, choose vegetables. Laugh out loud. Give positive reviews. Go off the path.
Rubin’s lists are great run to browse through, and her scatter-gun approach sometimes really hits the spot (‘find an area of refuge’) and at others, are just downright silly (‘breakfast is the new lunch’). Some fall into the category of ‘True Rules’, others are ‘Secrets of Adulthood’ (‘It’s important to be nice to everyone’ next to ‘Bring a sweater’), then there are the Twelve Commandments – the first of which is ‘Be Gretchen’ – and finally, the Eight Splendid Truths (‘To be happier, you have to think about feeling good, feeling bad, and feeling right, in an atmosphere of growth’ being my favourite).
Rubin is an omnivore when it comes to citing others. In this peppy tome, you’ll find quotes from everyone: Winston Churchill to A.E. Housman, Thomas à Kempis to John Stuart Mill, Aristotle, Buddha, Jesus, and her sister Elizabeth. But she starts her quest inspired by Aristotle and Benjamin Franklin: the former who declared that happiness was the summum bonum, the greatest good, and the latter because he was an absolute fiend for lists. In Ben Franklin, Rubin finds a fellow compulsive resolution maker. He strove to live his life according to thirteen virtues: temperance, silence, order, resolution, frugality, industry, sincerity, justice, moderation, cleanliness, tranquility, chastity and humility. Rubin puts these ideas into her whirring happiness machine and sets the spin cycle to Sex-and-the-City. The results are minty-fresh, easy to digest and far more toothsome to the modern gal than Franklin’s Puritanism.
After eleven consecutive months of striving to be happier, Rubin goes for broke. December is the biggie – ‘Boot Camp Perfect’: ‘I would follow all of my resolutions, all the time. I would aim to see nothing but gold stars glittering on my Resolutions Chart. This goal of perfection was daunting, because following my resolutions took a huge amount of mental discipline and self-control – not to mention, it took a lot of time.’
Reading The Happiness Project is quite a project in itself. Putting some – or even any – of Rubin’s resolutions into practice seems like simultaneously an excellent idea, and an absolutely exhausting prospect. But thousands of people out there have jumped on board, contributing their own happiness projects to her mega-successful blog, and prompting the appearance of a sequel – Happier at Home – and another in the pipeline (Before and After). That’s a whole lot of Happy.
On the other hand, if you’re feeling like all this sounds like too much hard work, I would recommend a different book on the subject, the chalk to Rubin’s cheese, Thich Nhat Hanh’s book Happiness. His secret seems to be to do nothing very much but be aware of your breath, mindful in your actions, kind to others, and kind to yourself. The perfect antidote to Gretchen Rubin and a lovely reminder that happy is as happy does, and though the way we skip, stagger, glide or hop along the yellow brick road of life, we’re all heading towards Oz. Who knows, we may even arrive someday.

The Hindu Business Line Supplement, May 2014