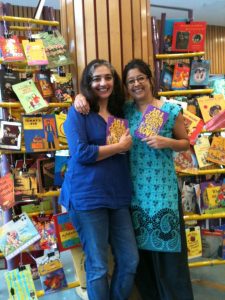 Hanging around in the children’s section of bookshops is one of my favourite activities. Apart from the joy of being enticed and seduced by all manner of books – colourful, informationful, crazy, imaginative books in a range of sizes, shapes and formats (some with actual bells and whistles) that way out-strips anything on offer in the ‘adults’ sections – it’s a great place for people-watching and clandestine eavesdropping.

One time, I was downstairs at Spell & Bound in SDA Market in their lovely children’s section, immersed in a book when I heard the clatter of tiny feet as they clumped down the spiral staircase and a young lad of about six launched himself across the store and grabbed a copy of the latest Diary of a Wimpy Kid. He clutched the book to his chest and stared up at his dad with a look that would have made Bambi blush. “Pleeeeeeeaaaaase?” he managed to squeeze out.

His father looked around, cornered. “Wouldn’t you like to try something else… like… um… hey, this looks great…?” He grabbed a National Geographic Encyclopaedia of Animals from a shelf and dangled it in front of the child’s eyes. The kid began vibrating as if about to explode. “Okay, okay,” his father quickly put it down. “But…er…haven’t you already read…?”

And much as I disapprove of children in shops cranking up the emotional pressure to get what they want, I couldn’t help but be rather pleased that the thing in question was a book rather than a slab of chocolate or iPod or Transformers toy (or whatever). The father and I exchanged a look – somewhere between complicit, resigned and grudgingly proud – as he reached for his wallet.

Another time, sitting in the Full Circle bookstore in GK1, I spent several hours watching small children gravitate towards some books, while their pet adults pulled in a different direction. Occasionally, adults and children would alight on the same book – almost inevitably an Enid Blyton – but more frequently they tugged away from each other. Endless streams of well-intentioned parents reaching for Classics, for non-fiction, for something featuring tribal art, for something a little, well, um… improving in some way. And rivulets of small people rushing towards comics, Percy Jackson, TV-tie-ins like Shin-chan or Chhota Bheem, or tall dark vampires with come-to-bed eyes, or books that twinkle and shine or promise high-tech weaponry.

And I wondered what is it about some children’s books that appeals to adults, and others that seem only appealing to kids?

Having worked in the field of children’s publishing for ten or more years now, I still find myself stumped for answers. Part of the problem is that, unlike when publishing literary fiction (for example) where your reader and your buyer are one and the same, children are rarely the decision makers when it comes to buying books. The big challenge for creators of children’s ‘content’ (as we’re now supposed to call it) is to hit that sweet spot where a book appeals to its reader – the kid – as much as it does to its buyer – usually an adult.

These adults, unappealingly cast as ‘gate-keepers’, need to be placated (or enticed, depending on how you see it) with all the metaphorical bells and whistles that the book promises: this book will offer wholesome entertainment, will improve your child in some way, will increase their vocabulary, will teach them valuable lessons in life, will make them better people. And the Mother of All Questions: “Will this book help little Anand/Preeti/Pintu/Zoya get better marks?”

Then there’s the scenario very familiar to all booksellers, of a parent flipping through a picture book, scanning the number of words, looking at the list price on the back of the book, and making a hasty calculation of textual bang for their buck. The Golden picture book maxim – the less words per page the better: let the pictures do the talking – goes head-to-head against the paisa-vasool-rule and no prizes for guessing which usually wins.

Chatting to the manager of Bahri Sons kid’s store in Khan Market a few months back, she launched into a familiar lament. “It’s so hard to get people to buy Indian children’s books!” she cried. “Parents and kids just want imported stuff. And the only people who are interested are foreigners who like tribal art and folktales.” The resistance to Indian children’s books seemed to boil down to the fact that parents feel that imported books – any imported book – have gone through some kind of ‘quality control’ mechanism. It’s not (quite) that ‘imported=good’ and ‘desi=bad’, it’s more that with Indian books – rightly or wrongly – parents feel that there just aren’t the same kind of checks and balances, whether on the editorial side, design department or production side.

Rather than ‘take a risk’ on a relatively unknown Indian book, the average parent (or teacher or librarian for that matter) is more likely to plump for a completely unknown imported one. Odd, but true.

Part of the problem is that there are so few resources available for buyers to see what is out there, and to judge what is good. Reviews of children’s books are notoriously hard to find, and often not very much help when you do. Until a few years ago, we didn’t even have a national book prize for children. Now, at least, there is a children’s category for the Vodaphone-Crossword prize, although given that this lumps together everything from baby’s first board book to teen fiction, some might argue that it’s fairly meaningless (indeed, last year’s jury decided to not award an overall prize at all).

The other perennial problem is where to go for good information about what’s available out there. Look at what’s available by way of navigational aids to help buyers in the West sail happily through the high seas of children’s publishing:  Children’s Literature by Peter Hunt (Blackwell), Great Books to Read Aloud by Jacqueline Wilson, the School Library Associations graded series Riveting Reads, Alison Lurie’s Boys and Girls Forever: Children’s Classics from Cinderella to Harry Potter; Julia Eccleshare’s wonderfully titled 1001 Children’s Books You Must Read Before You Grow Up; and – my favourite of all – The Ultimate Book Guide series published by A&C Black.

What did we have in India? Um, well let’s see. Nothing much.

A few years back, Samina Mishra and I decided to try and if not rectify the situation at least do something about it. Our initial idea was to compile a guide to 200 books that a panel of experts decided were worthy of inclusion. We juggled the words ‘essential’ and ‘ultimate’ and ‘best’ in the air, until they crashed to the floor and we realised, simply, that this was a fool’s errand. We didn’t need a semi-divine posse of eggheads to come up carve a list on a tablet of stone: what we needed were readers who loved children’s books to share their passion.

Instead of critical reviews, we wanted enthusiastic recommendations. Yes, we wanted to engage people’s minds, but equally we wanted to reach their hearts. After all, the children’s books – any books – that stand the test of time, that become bestsellers, or go on to be classics are those that people (of all ages) fall in love with.

So after several years of to-ing and fro-ing, consulting and reviewing, gathering and honing and pruning and reading, we finally published a slim volume modestly but we hope accurately titled 101 Indian Children’s Books We Love. Helpfully divided into age-wise categories this is a guidebook that not only tells you about the books themselves but offers useful, practical information about the author, the illustrator, the publisher, other books that you might like. It also includes four essays on Hindi, Bengali, Malayalam and Marathi children’s books in an attempt to at least gesture to the wealth of literature in other languages out there.

We hope that it will be used by parents and librarians and bookstores across the country as at least a first step in the right direction. We would like it to reach out to others publishers internationally who are looking to find out more about – and maybe even buy rights to – Indian children’s books. We hope that it will go into many new editions, and that in the years to come, we’ll see similar guidebooks – perhaps just focusing on young adult literature, or on books for the very young, or in regional languages. For our part of the world is still a region of ‘book hunger’, and children particularly deserve books of all sorts that not only foster literacy but will nourish their hearts, minds and enrich their imaginations.