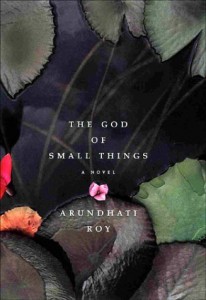 First reading the God of Small Things, before the hype and hoopla that accompanied its winning the Booker Prize, it didn’t seem likely that this slender, tender story of two children’s lives in a small Kerala village would become one of the most political novels to have come out of India in the 20th century, and its author the country’s most famous political activist. The story opens quietly, vividly:

“May in Ayemenem is a hot, brooding month. The days are long and humid. The river shrinks and black crows gorge on bright mangoes in still, dustgreen trees. Red bananas ripen. Jackfruits burst. Dissolute bluebottles hum vacuously in the fruity air. Then they stun themselves against clear windowpanes and die, fatly baffled in the sun.”

From the first page, the reader is plunged into the world of the novel, surrounded by colour, sound, texture, smell, taste. It’s a hallucinatory, mood-altering experience.

David Godwin, Roy’s agent, described it as “like a shot of heroin in the arm,” and as she describes their first meeting to me, it is clear that it was this comment, rather than the promise of huge advances or worldwide publicity, that convinced Roy to sign up with him.

Sanjeev Saith, the photographer and friend whom she chose to take the cover picture, and who set up the publishing company India Ink to bring out her book in India, was likewise overwhelmed. “I read the first chapter, and then stopped. I rang her up and said, look, it’s so visually powerful that I can’t read any more until after I’ve done the shoot,” he recalls. Saith and Roy travelled to Ayemenem and spent days drifting along the backwaters in search of the perfect image. Yet, when the selection was sent to London, to Roy’s UK publishers, HarperCollins, they finally chose the first image that he had taken – ironically, not in Kerala at all, but in the lotus pool outside the India International Centre in New Delhi. Roy, with characteristic single-mindedness, insisted that this image appear on the cover of every single edition of the book worldwide. It has become one of the most iconic covers of all time.

A few months after the book was released, the judges of the Booker Prize announced their verdict. In more or less time-honoured tradition, Roy’s novel, like Booker Prize-winners before and after it, provoked strong reactions. Gillian Beer, Professor of English literature at Cambridge and the chair of the jury, praised the book’s “extraordinary linguistic inventiveness,” while the previous year’s chairperson, publisher Carmen Callil, pronounced it “an execrable book” which did not deserve to be on the shortlist, let alone win.

Reactions – both positive and negative – tended to revolve around the novelist’s literary style. What for some was over-written, self-indulgent whimsy for others was lyrical, heartrending, inventive and unique. My own feeling is that far from imposing her own literary flourishes on the tale, the voice in which it is told is entirely contiguous with the characters it revolves around. Estha and Rahel, the twins around whom the story unfurls, are linguistically adventurous. They speak and relate to each other and their world in secret tandem, almost like wolf-children. Words are chopped up into their component parts: Ei. Der. Downs. Or gleefully strung together: Orangedrink Lemondrink. Misheard (“porketmunny”) and deliciously onomatopoeic (“Hslip Hslip Hsnooh-snah”). Phrases, repeated, take on a nursery rhyme cadence and grammar submits to a child’s understanding (“Margaret Kochamma told her to Stoppit. So she Stoppited.”). The result is a vertiginous ride through the English language, piloted by a trapeze artist of consummate skill and recklessness.

The God of Small Things is as structurally inventive as it is stylistically unorthodox. The entire plot of the novel is revealed in the first few pages. The reader quickly learns that when they were seven, the twins’ nine-year-old half-English cousin, Sophie Mol, had died. That the guilt associated with her death has marked their entire lives. That their mother, Ammu, died soon after, tragically young. That Velutha, the low-caste ‘untouchable’ was killed in connection with Sophie Mol’s death. And that Velutha and their mother were in love.

It is this love story – ironically – that is the most overtly political element in the book. The fictional transgression of unwritten laws – the “Love Laws… that lay down who should be loved, and how. And how much.” – provoked a real, legal case, in which the author was charged with obscenity. The case didn’t amount to much, but I cannot help feel that the fact that it happened at all must have delighted the author: a resounding confirmation that she had hit a very raw nerve.

But the political import of God of Small Things is by no means confined to an attack on horrors of the caste system, nor even to its stinging critique of Communist Party politics, the Syrian Christian Church or patriarchy (although it is, simultaneously, all of these things). The clue lies in the title: a phrase which, like the other big Indian Booker, Midnight’s Children, has entered into common parlance. Roy’s presiding deity is not the all-seeing, omnipotent God of organized religion.

Who could he have been?

The God of Loss.

The God of Small Things.

The God of Goose Bumps and Sudden Smiles.”

By placing the marginal at the centre, by giving the silenced a voice, by bringing the overlooked under the magnifying glass, she articulates a profoundly humanist politics in her novel, that all her subsequent nonfiction writings – against nuclear arms, against rapacious mining corporations, against a violent bureaucratic state – reconfirm.

This is profoundly linked with the question of style. Roy has faced considerable criticism for the literary style she deploys in her political writings: for bringing the personal into the political and resolutely refusing to divorce the two. In response to the most outspoken attack on her by historian Ramchandra Guha, Roy writes: “My style, my language, is not something superficial like a coat that I wear when I go out. My style is me – even when I’m at home. It’s the way I think. My style is my politics.”

Sitting with her, sipping coffee in her light-filled apartment in New Delhi, as the short spring wheels into summer outside, glazing the new leaves limegreen, it is abundantly clear that for all her firebrand radicalism, the most potent weapon in Roy’s considerable arsenal is humour. She smiles a lot, laughs easily. I get the impression that if you gave her a high horse she would give it a lump of sugar far sooner than clambering on top of it. She’s someone who clearly takes her work extremely seriously, and herself not at all. “I used to go to these meetings and stuff,” she recalls, “and it was like bringing a Kalashnikov to a cocktail party, you know?”

One of the most delightful things about God of Small Things is its lightness of touch – we are invited to enjoy the absurdity of those who are used to being taken Very Seriously Indeed.

When Roy says that there is “really not much difference between my fiction and my nonfiction writing,” what she means is not that the two are interchangeable, but that, on the contrary, the form and the content are similarly intertwined in both. But to me, there is a difference – one which calls to mind the words of another radical thinker, and the progenitor of the modern environmental and social justice movements of which Roy herself is so closely allied: Henry David Thoreau. When he wrote, “Electricity kills darkness, candlelight illuminates it,” he could well have been describing the different ways in which nonfiction and fiction work in order to shed light on a particular truth. What is sometimes lost in Roy’s political writings is the journey that the reader makes towards a realization: her position is crystal clear from the outset, and the reader is swept along with by the author’s emotional conviction rather than the cool construction of an argument. The novel works very differently, telling the truth but telling it slant, in Emily Dickenson’s phrase.

Whatever else it is (and it is many things), The God of Small Things is a book about truth and lies, the hypocrisies of polite society and the horrors that they elide. It is a book about how the big things in life are actually the small ones. The way an unthinking comment can leave an indelible scar on a child’s mind. The fact that life is precarious and everything can change in a day. The fact that the love between a man and a woman can precipitate calamity.

Roy’s novel has sold in excess of 5 million copies and has been translated into at least 21 languages worldwide. Each of her subsequent five collections of essays has been a massive commercial success. She is, perhaps, India’s most widely-read author writing in English and has been translated into many Indian languages. She is has used her success as a novelist to bring into the mainstream the voices and stories of those who are routinely marginalized and silenced by the machinery of the state and the seemingly unstoppable march of globalized corporate capital. The fact that her writing (particularly her political writing) touches people living outside India’s elite metropolitan centres is, she says, “the greatest gift any writer can have. It’s like…” she goes on, unconsciously echoing Godwin, “straight into the bloodstream of the society that you live in, that you love. That you hate.”

Her agent was right: reading Arundhati Roy is like a shot in the arm: a powerful jolt, a kind of awakening. The emotional resonance that The God of Small Things found in readers across the world, bears witness to the power of a story well-told, of characters who live beyond the page, of imagery that seems to tap into our most intimate dreamscapes, reminding us of our common humanity – the frailty wherein lies our strength.