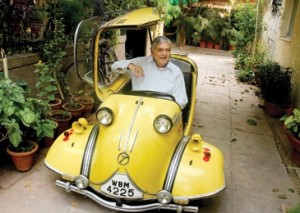 It was a muggle morning. The sun was shining, the sparrows were chirruping, the sweepers were sweeping, people were getting ready for work, not a whisper of magic. I turned into the little park inside the colony and stopped dead in my tracks. There, parked on the pavement under an awning of bougainvillea, was a…  Was it a bird? Was it a plane? Sunflower yellow, with little round headlamps, and two chrome strips curving down on either side of the dinky front number plate like the trimmed moustachio of a Parisian dandy. It was beautiful.

The lady of the house was out watering the pot plants.

“Jyoti,” she called into the house, with the air of someone to whom this sort of thing happens, a lot, “someone about the car.”

Her husband, a large white-haired gent with a military air about him, emerged, drying his hands.

“Yes, that’s right. But after the war, you know, they weren’t allowed to make aeroplanes anymore, so they sort of adapted the design to make these cars.”

He proudly showed me around it. The entire right-hand side was one big hinge, so you could swing the top open, like climbing into a cockpit. The steering wheel was not a wheel at all, but a tubular steel rod, curved at either end like old-fashioned bicycle handles, and the gear stick stuck out from the door on the driver’s right. There was a single seat, and a single pedal – the brake – on the floor.  The engine, the owner explained, was at the back. I was itching to press one of those tempting buttons on the dashboard to see if, with a creak and a judder, wings would extend from the dinky fuselage.

There’s something innately appealing about pushing buttons, and having your vehicle do unexpected and cool things. The love-affair between James Bond and his Aston Martin is infinitely more tender and lasting than with his curvaceous female counterparts, and it should be no surprise (although somehow, it always is) that Ian Fleming also wrote the mother of all flying car stories, Chitty Chitty Bang Bang.

I remember watching the film when I was little and that fantastic moment when the car roars off the cliff. What Frank Cottrell Boyce calls the ‘Chitty-falls-off-the-cliff’ moment is a brilliant feeling – the rush of wind, the imminent disaster, the uplift as the red and yellow wings sweep out from the fenders and the car soars into the clear blue sky (Mr Weasley’s flying Ford Anglia is a modern tribute, I suspect.) Boyce recreated that magic in a book published a couple of years back: Chitty Chitty Bang Bang Flies Again, in which the Tooting family build a car, an extraordinary car, a magical car – a Volkswagen camper van with the heart of a lion. They travel the world – from top of the Eiffel Tower to the Pyramids in Giza and beyond – collecting bits of the original car until finally, it sheds its trippy hippy carapace and emerges in all its original, reconstructed glory.

Warming to his theme, Mr Sinha told me how the car had been brought to India from Germany, and fell into the ownership of a friend of his who had enthusiastically dismantled it, and then spent years trying to put it back together. Take the bits, the owner proposed, and if you sell it for scrap, give me half the money you get from the radi-wallah… but, if you manage to actually put it back together, you owe me a bottle of scotch, which we will share.

With a bit of help from the Internet – just like Mr Tooting in Boyce’s book – Mr Sinha succeeded where his friend had failed. I smiled at the thought of the fine single malt, and immediately rushed home to Google. The nicest bit of Messerschmitt trivia I came across was a radio interview with Elvis Presley in which he describes another brilliant deal: “Ah tell ya what ah did the other day. I had a German-made Messerschmitt li’l car? And thar’s a guy there in town’s bin wantin’ that Messerschmitt fer the las’ year. He owns… the top clothin’ store in Memphis, so ah went there the other day and I tol’ him ‘You bin wantin’ the car s’bad, I’ll do a deal with yuh.’ I said, ‘You let me pick out all the clothes in here that I want’n you c’n have the car.’ So I was up there for ’bout two hours an’ the store was a wreck when ah left.”

The King and the Bubble car. Quite a story, huh? I think Ian Fleming, Frank Cottrell Boyce, and Arthur Weasley would have approved.