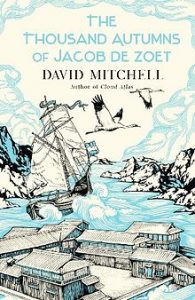 In the interests of transparency, I should declare that when it comes to David Mitchell, I am less of a critic than a fan. Okay, devotee. Having been blown away by Ghostwritten – a book that is practically the definition of the phrase “masterful debut” – spellbound by the Murukami-like trippyness of number9dream, still reeling from his breathtaking Cloud Atlas, and tickled to death by bizarre suburban Englishness of Black Swan Green, I approached The Thousand Autumns of Jacob de Zoet with trepidation. Pedestals are designed for people to fall off, and I feared that Mitchell would go the way of Don DeLillo (Cosmopolis) and Rushdie (Ground Beneath her Feet – a book that truly deserved to be).

Within the first few pages, it is clear that the blurb-writers on the back are not exaggerating: here is yet another book by a “storyteller of genius,” possibly “the greatest British writer of his age” who is “dizzyingly, dazzlingly good.”

(For those who have not yet encountered this extraordinary writer, a note on what wikipedia calls ‘disambiguation’: there are two David Mitchells, both British, more or less the same age, one brought up in Wiltshire, the other in Worcestershire. One is primarily an actor and comedian, the other primarily a novelist who is, frequently, very funny. The latter – let’s call him, for simplicity’s sake, ‘our David’ – is a rather handsome chap; the other looks like a haddock.)

The novel is set in late 18th century Dejima – an artificial island built in the bay of Nagasaki as a trading post, where the young Dutch clerk of the title, arrives aboard the Dutch East India Company (VOC) ship, Shenandoah. His task, and that of his boss, Unico Vorstenbosch, to bring Dejima’s current Chief, Daniel Snitker to justice for fraud, theft and “Gross Dereliction of Duty.” Dejima is the only point of entry for foreign goods into Japan. It is a self-enclosed world, connected on one side by a bridge to the mainland, the “land gate”, and on the other, the “sea gate” to the ocean – and the rest of the world. A Janus-faced setting perfectly suited for the secrets, spying, double-crossings and subterfuge that go on there. Forbidden from crossing over to the mainland, and allowed to reside on the island only under strict laws, the Dutch traders view Dejima as both a prison and its opposite: a place where fortunes are made and lost, reputations built or shattered, the hub upon which the great wheeling mass of empire spins.

Early on in his stay, de Zoet encounters the island’s resident surgeon, a learned, irascible, scholarly gent by the name of Dr Marinus. Marinus bears a strong resemblance to a real historical figure, the German physician, Philipp von Siebold, the first European to teach western medicine in Japan. Von Siebold married a Japanese woman (like David Mitchell himself) and, under his tutelage, their daughter became the first Japanese woman doctor of medicine. Dr Marinus also has a woman student among his seminarians – the daughter of a Samurai, Orito Aibagawa. Cultured, intelligent and a talented midwife, de Zoet is captivated by her. The burns on one side of her face serve, in his eyes, to simply enhance her beauty.

If The Thousand Autumns… is about the workings of empire, it is also, equally, a simple (well, actually, complex) love story. In commerce, as much as affairs of the heart, what is said and what is meant are often two very different things. Add to this the elaborate etiquette of Edo Japan, the yawning cultural gap between the Japanese and the Europeans, the translations from one language, one idiom, to another, and it would have been easy for a less sure-footed writer to lose the plot. Fortunately, the plot – involving kidnapping, a chase, escape, industrial espionage, religion, murder, poisoning, the lot – is robust enough to hold.

Mitchell’s unerring ear for dialogue results in the historical past being present to the reader with shocking immediacy. We almost feel we are on the convict ship with the Irish carpenter Con Twomey: “Hundreds of us there were, in that dark an’ stifling hold; cockroaches, puke, fleas, piss… rats as big as feckin’ badgers… an’ every waking and sleeping minute our one thought was Water, water, Mother of God, water… our ration was a half-pint a day an’ it tastes like sailor’s piss, which no doubt much of it was.”

At another point, a Japanese magistrate surveys the town and Mitchell seems so mesmerized by the world he has created, that he inhabits so viscerally, that his prose spills over into poetry: “silent nuns; nine-year-old whores; the once-were-beautiful gnawed by sores; statues of Jizo anointed with posies; syphilitics sneezing through rotted off noses; potters; barbers; hawkers of oil; tanners; cutlers; carters of night-soil…”  – culminating in a single, thought: “This world… contains just one masterpiece, and that is itself.”

The title of an interview with the author in last month’s New Yorker says it all, really: “What can’t the novelist David Mitchell do?” Perhaps he can’t sew or cook or play the oboe, but if we’re talking strictly about his skills as a writer, the only possible response is an eloquent shrug, and the words: “not much.”

At one point, Orito muses on an old aphorism: “The belly craves food, the tongue craves water, the heart craves love and the mind craves stories.” The Thousand Autumns of Jacob de Zoet is a banquet for the mind – and a hot favourite for the Booker this year. Rabellaisian humour, pathos, high drama, obstetrics, the history of Dutch colonial trade, passion, and lessons in the noble art of Japanese courtly etiquette – Mitchell does it all, and more besides. Read him, and weep.