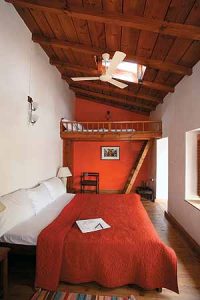 You know that game where you ask everyone in turn: Cat Person or Dog Person? Beatles or Rolling Stones (or whatever telling binary you happen to be drunk enough to find meaningful)? Well, in Sea versus Mountains, I am definitely one of the Mountain People: a natural predilection that 13 years of living in Delhi—where the steepest gradient for miles is my neighbour’s driveway—has only heightened.

Apart from the obvious—the fresh air, the wide, open spaces, the stunning views— the allure of the mountains lies in the simple fact of there being ups and downs. The eye is oppressed by flatness and enchanted by different levels: a fact that Geetan Batra has intuitively grasped in the design and layout of her idyllic guesthouse, Two Chimneys, in the Kumaoni village of Gethia. Just as outside there are heights and depths, terraces and slopes, inside, the house is a maze of staircases, mezzanines, lofts and ladders. As for the fresh air, the sense of spaciousness and the views, they too are part and parcel of what makes this building so magical. The stone walls, the parquet floors and the pinewood rafters conspire to make-believe that the house has risen organically from the earth around it. Each and every room is wide and spacious, and the huge wooden windows look out on every side, more like the frames of paintings than simple casements holding glass. The inside beckons you out and the outside welcomes you in.

I asked one of the other guests what was her first impression of the place. “The breeze—and the stillness,” she said, after a moment’s pause. “The place is very restful, very still, and it’s full of energy that flows: you can really feel that.” Whether you believe in vaastu or feng shui or just plain old good design, you can’t help but agree.

Ten years ago, the house was a semi-derelict ruin, perched out on the spur of a hill just below Nainital. It had been built in the late 19th century by a European woman. Not much is known about her: some say she was the general’s wife, some say she was British, others that she was French, and whether she really did fall in love with the cook’s son or not is something we will probably never know. What we do know is that she knew a thing or two about treating consumption—or perhaps was just a very canny estate agent. The climate of this place—with its pure air, the ozone-rich mountain breezes and especially the healing mists that rolled up from the valleys during the rainy season—was ideal for tubercular gentlefolk. She built a sanitorium at Gethia—which still stands, although the last of its delicately coughing patients have long since departed to the other side—and quickly decided that this spur, so dramatically poised, like the prow of a ship jutting into the swelling contours of the valley, was the perfect location for her own house.

“A friend made this for me,” said Geetan pointing to a wooden plaque hanging on one of the stone pillars near the entrance with the words ‘Madame Durel’s Lodge, 1899’ carved on it. The story is that for several years, the caretaker, Kailash, had repeatedly told Geetan that the ‘memsahib’ was not happy that her home was “taken forward, having a new life,” and that this was why construction work had been beset with so many difficulties. He implored Geetan to do pujas and make offerings to appease the disgruntled shade, which she ignored. She told this story to a friend who, several weeks later, sent the plaque which he had carved. She put it up and… “Well,” she says with a smile and a shrug, “it seems to have worked. I mean, look, the house got finished!”

The house is the setting for Tarun Tejpal’s novel, The Alchemy of Desire, a book that the owners have thoughtfully included in their library to provide the guests with a dramatic taste of ‘before and after’. On the cover, the house is a gloomy edifice, all stained walls and cracked plaster: the perfect des-res for a displeased lady-ghost. The house now is an elegant, many-faceted creation of wood and glass with gables and dormer windows and a bottle-green tin roof—and the resident spirits, if there are any, cannot but be playful and benign. The original house forms the solid, stone heart of the new construction, and is now surrounded on all sides by extensions—verandas and sit-outs and rooms and balconies.

“Everyone told us that you have to have small windows because of the wind, which can be ferocious,” explained Geetan as she showed me around. “But it just wasn’t working: so we ripped them all out and put in lots and lots of glass.” This is no understatement— either of the winds or the windows.

I’m not entirely sure of the proportion of wall to glass, but it must be nearly 50-50. All the guestrooms—and that includes the bathrooms (which are, by the way, the nicest, most tasteful and most elegant bathrooms you could ever hope to powder your nose in)—are flooded with natural light.

There are seven guestrooms at Two Chimneys, of which three—the Goat Shed (it really was a goat shed originally—though you’d be hard put to imagine its earlier inhabitants in there now!), the Olive Room and the Study— can accommodate two people while the Oak Room can accommodate four. The Willow Room can sleep five, and the Deodar Suite holds six—both of which have double beds in the loft and an additional room alongside the main bedroom. The largest room, First Things, has an emperor-size double bed (“You can get an entire family in there,” says Geetan) as well as an anteroom and a capacious loft with a double bed and space for extra mattresses if need be. All of the rooms, apart from First Things, have their own secluded sit-out areas, either lawns or balconies, and spacious en suite bathrooms.

We got a taste of the wind on the first day—it was a gentler cousin of the loo of the plains, but it was hot against the skin and set the wind chimes by the pool dancing and the tablecloths straining to fly. The second day dawned absolutely still: not a whisper or breath to ruffle the water’s still blue surface. But by late afternoon, the clouds had rolled in, the thunder was grumbling, and the few raindrops pattered down. I lay on the lawn, gazing up at the ever-shifting play of clouds. By evening, I understood exactly what Geetan had meant by ‘ferocious’. A howling gale ripped down the valley, banging doors and threatening to lift the roof off—it did, in fact, rip one window off its hinges and send it frisbeeing out across the lawn. The eucalyptus trees flailed around in the blackness; twigs and debris were flung up into the wild sky, lit by massive flashes of purple and silver lightning.

While the children lay safely sleeping in their downstairs bedrooms, the adults gathered around a roaring fire in the sitting room. It is one of the two original fireplaces—the other is in the long dining room next door—which have been lovingly restored, and guide the smoke up to the two squat white chimneys for which the house is named. On the wide mantlepiece in the dining room, Geetan has set two griffin-like gargoyles—twins to the third which stands, wings upraised, at the front entrance. These little touches are evidence of the care and thought that has gone into making the house what it is today. The collection of masks on the pinewood panelling, the sandstone snail doorstoppers, the mobile of painted wooden tropical fish in a small bathroom alcove: everywhere you look, there’s something to delight the eye and soothe the senses. No two pieces of furniture are quite the same, and each bedroom has a distinctive colour scheme—a splash of bold tangerine in ours, a daring raspberry highlight in another, the third a soothing olive-green. It could have so easily ended up jarring, but her professional know-how as gathered over the years working with design magazines coupled with her artist’s eye for colour and form, has ensured that the disparate elements work together to make a harmonious whole.

Did I mention the swimming pool? I didn’t? Well, it’s a testament to how enchanting the house is, that the swimming pool has had to wait till the end. In many ways it’s the focus of the house. Tiled in blue and surrounded by wooden decking, it acts like a magnet and we found ourselves in or around the pool most of the time—soaking in the sunshine or dining in the moonlight. The platform has been built around the existing trees—which grow up through the floor, and spread out above you, so that you get the strange and delightful sensation that you are actually swimming in the treetops, sharing space with flocks of white-cheeked bulbuls, Himalayan magpies and chittering crowds of munias.

On day one, as the mothers slathered their golden-brown offspring with sun lotion, and baked gently at the poolside, Geetan extolled the joys of the monsoon: “Oh, you should come here during the rains. It’s just spectacular: everything turns green and these amazing mists roll up the valley. You can literally see the weather front approaching.” We were there for just three days, but—as though some celestial travel agent had decided to lay on an all-season tour—managed to experience every climatic condition barring snow.

Two Chimneys offers many things: excellent dining, wonderful surroundings to hike around, gorgeous and comfortable rooms, private sit-outs, spectacular views, a beautiful sunken garden. For kids, old and young, there is a table tennis board, carom, badminton, darts and an assortment of board games from chess to snakes and ladders—not to mention a well-stocked library. It is a bird-watcher’s paradise and, if you’re really lucky, you might even spot the local panther out on his night-time prowl.

A word of caution: if you’re someone who enjoys the anonymous luxuries of the five-star hotel chain, Two Chimneys is probably not for you. The electricity goes, often, and there is no TV. For some people these two facts would count against the place. But if you, like me, savour the prospect of a quiet game of Scrabble by candlelight, take my advice: Two Chimneys is now open for bookings—pack your bag, your swimming costume and your family or friends, and head for the hills.